Skipper Sowah scored his first with a fierce shot from close range and added the second goal moments later with a powerful finish.

With his side dominating the exchanges, lanky striker Atta made good use of his height to nod home from a corner before completing his brace (LSA’s fourth) with an angled drive. With five minutes to the end of the 30-minute first half, Dansoman Barcelona breathed life back into the game with a long range chip to reduce the four-goal deficit.After the break, LSA continued to dominate the exchanges but Dansoman Barcelona set up a tense finish with two late goals which came too late to deny LSA victory.

The third-placed match ended 2-2 in normal time and Akosombo FC edged Desidero 4-3 on penalties. Akosombo lost 0-3 to LSA in the semi-finals, while Desideros squandered a four-goal lead to lose 4-5 to Dansoman in the other semi-final clash.

The coach of LSA, Nana Agyemang, was confident that his side would next year see off the challenge from the best U-13 teams in the world and return to Ghana with the trophy.

He stressed the need to improve the channel passing of his team to make the attack unpredictable.

Salgado, convener of the Spanish Soccer Schools and MS2, organisers of the U-13 Dubai International Cup, was impressed with the level of competition exhibited by all the eight participating teams and described LSA as worthy champions. 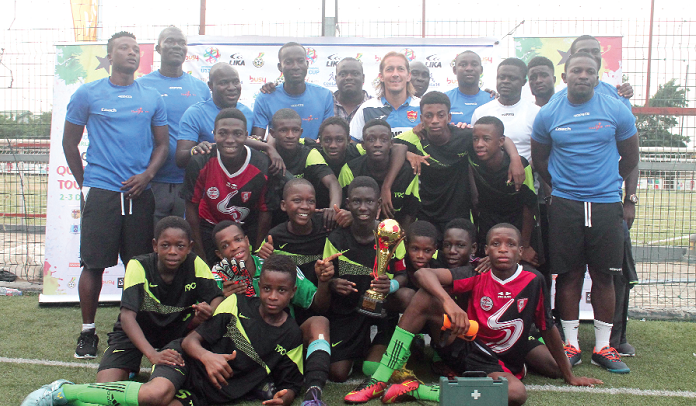 ABOUT U13 INTERNATIONAL CUP

The Intercontinental Cup is an international youth football tournament for U13, U12, and U11 Club teams. The high-quality football tournament is designed to provide unforgettable days of football and fun – on and off the field. In addition, the tournament represents a unique opportunity for hosting countries to promote tourism and for Sponsors to run football related activations.

The Intercontinental Cup is the perfect combination of football and holidays – 4 days full of matches broadcasted live across the globe to be played by 20 teams representing the finest football clubs in Europe, America, Asia, Africa, and Oceana.

The Intercontinental Cup was founded by Spain and Real Madrid Legend Michel Salgado. Bigfooti joined forces with Michel Salgado as Co-founder with aim to develop the tournament on International stage.